The ongoing COVID-19 public health crisis is affecting the lives of people all over the world, including Weston residents. We want to know how YOU have been affected. If you’re a resident of Weston, Massachusetts, consider this a chance to add your voice to the historical record. Tell us about how your work life has been changed, what precautions you are or are not taking, and how you’re coping with crisis.

Note: The survey is based on one created by the Cambridge Historical Society. WHS would like to thank CHS for allowing us to reproduce their survey. 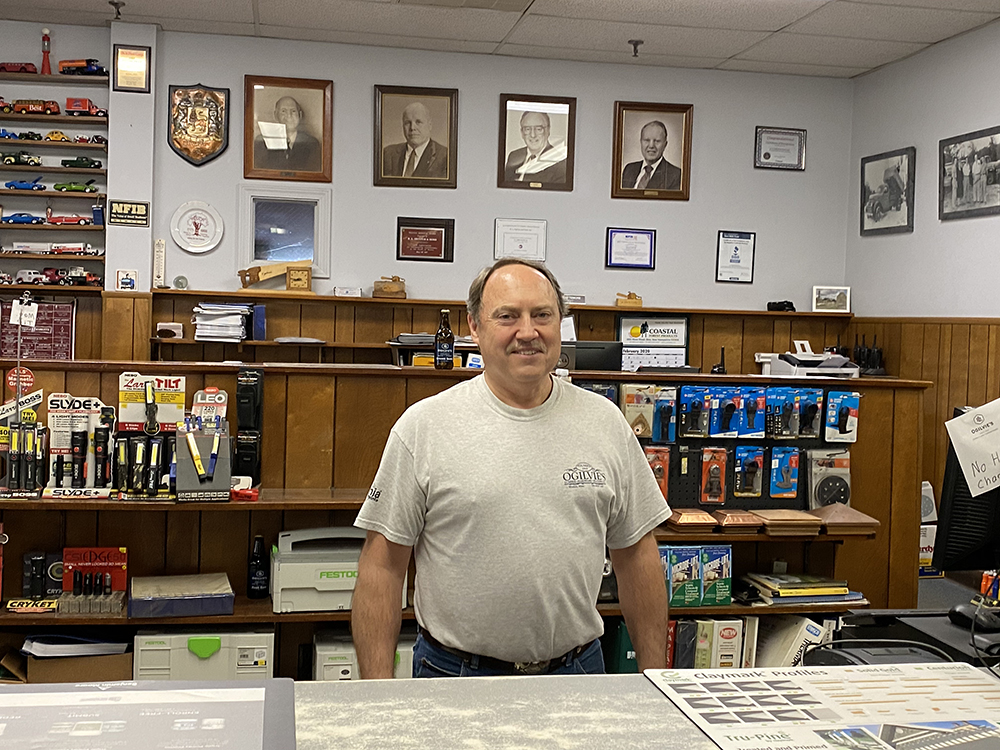 In 2019, B. L. Ogilvie & Sons celebrated its 100th anniversary. Changing times and the coronavirus have brought about the closing of this venerable Weston institution just one year later. To see photos of Ogilvies over the years, view the new photo gallery in the Topics section. Pam Fox interviewed owner Kevin Whittemore, great-grandson of B.L. Ogilvie, on April 1, 2020.

Question: Ogilvie’s has been in business for 100 years. How has Weston changed in ways that affect the business?

“It seems that the needs of the community have changed from merchandise to services. We find there’s not as many do-it-yourselfers as there used to be. Ogilvie’s closed on Saturdays after seeing a decline in sales. I think people are more involved with family activities or travelling on weekends. The days have passed when people would come in for supplies to build their own rabbit cages or chicken coops – that doesn’t happen anymore.

“There are not as many tradespeople who live in town now. It used to be that they would meet at Ye Olde Cottage every day and coordinate jobs, then go to Ogilvie’s to buy materials. Also, the Weston backyard horses have all but disappeared. Back in the 1970s we used to have a grain and feed delivery every week around town.

“The combination of increased commuter traffic and reconstruction of the town center has made it challenging for customers to get to us. My great grandfather chose this location because it was close to the railroad that would bring in supplies to our storage depot, but it wasn’t the best location for retail exposure. We had to rely on word of mouth from our satisfied customers.

“I guess it’s just a sign of the times.”

The deadly influenza of 1918 was one of the worst epidemics in human history, infecting one third of the world’s population and killing an estimated 50 million people worldwide, including 10,000 in Massachusetts and four in Weston.

War conditions and massive troop movements helped fuel the spread of disease. A unique feature of this pandemic was the high mortality of healthy people including those in the 20 to 40-year-old age group. At the time, there were no vaccinations, no anti-viral drugs to treat the flu illness, and no antibiotics to treat the pneumonia that often accompanied the influenza.

There were three waves of the pandemic in 1918, in the spring, with mortality similar to the usual flu; the fall, when the virus had mutated to a form much more virulent and transmissible, and late December through early 1919, which saw a rebound, perhaps due to the lifting of quarantines.

The second and most deadly wave emerged in September at Fort Devens, the U.S. Army training camp, and Commonwealth Pier in Boston, a center for returning sailors. On September 27, the Waltham Daily Free Press Tribune reported: “Call for Aid is Received from Weston:”

“With the disease spreading beyond control, physicians unable to meet their calls, and little service of nurses available, serious conditions exist in the town of Weston, because of the wild spread of Spanish influenza.

This morning an appeal was made for aid from Waltham. The call was for physicians and nurses; but no response could be made, for our physicians are worked to the limit, and, in fact, beyond that point, and there are not enough nurses available here to meet the demand.

Dr. Simpson of the State Health Department learned of the call for aid and he will endeavor to provide some assistance for the people of Weston.”

Services at all Weston churches were cancelled, schools closed for a week, and Red Cross meetings were discontinued for two weeks.

Perhaps because the town was less densely populated, the epidemic was less severe in Weston than in Waltham, where visiting nurses were seeing 164 patients a day in the first week of October. That same week, in Weston, the newspaper reported: “The epidemic appears to be abating in Weston due, perhaps to the great care which has been taken by the Board of Health in the closing of schools, churches and all public gatherings. Those who had the disease most severely are recovering and the later cases are milder.” (October 4, 1918)

Churches were reopened for regular services on October 20 and Weston Schools reopened in October after being closed for three weeks. Not long after, several more cases of influenza developed and the third grade was closed after the teacher fell ill. (Nov. 1, 1918)

The 1918 Town Report gives this summary:

The total of one hundred and three (103) cases reported does not, in the opinion of the Agent, give a fair idea of the actual cases of the disease present in the town. As the disease was not made reportable until October 4, the records are incomplete. After this date reports were sent to the Board by most physicians but some neglected to comply with this law, due undoubtedly to carelessness and also to the excessive demands made upon their time. The Agent feels that a total of at least two hundred and seventy five (275) cases of the disease existed in Weston.